When you join our Ho Chi Minh City Tour one day, besides famous places like:  War Crime Museum, Reunification Hall  and General Post Office … Along with that, a destination not to be missed on this tour is Binh Tay Market.

Binh Tay Market, constructed by the French in the 1880s, is located in the centre of Vietnam’s largest Chinatown district ( District 5 in the south west of downtown Ho Chi Minh). Unlike Ben Thanh Market in District 1, this market mainly serves the local population with its extensive range of fresh fruits, vegetables, poultry, meat and seafood from regions across Vietnam. 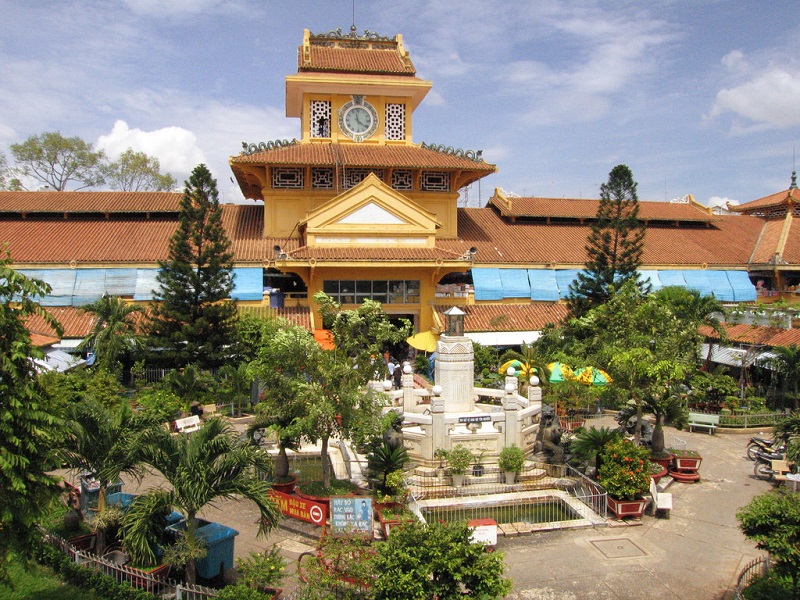 Also known as Cholon Chinatown Market (Cholon is the name given to Vietnam’s largest Chinatown), Binh Tay Market occupies a two-storey building along Thap Muoi Street. The market was built as per western architecture but with bold Chinese influence. It has a high rise tower and four clock faces. It is the largest and also the oldest market in Ho Chi Minh City, spanning four blocks. Chinese are good at doing business. The new market was built by a Chinese businessman after the old location burned to the ground. A memorial to the founder is still present today. In the center of the market stands a statue of Guo Dam.

Market operates around 2-3 am and 9-10 pm, business specialist wholesaler with the lowest possible prices. In addition to the small business to the place of business, market annually welcome many foreign tourists sightseeing and shopping.

Travellers can also find an assortment of handicrafts, lacquerware, and textiles that are sold in bulk, though goods are not varied compared to other (more touristy) markets in downtown Hanoi. Along with the interesting historical and cultural aspect of Cholon, Binh Tay Market is great for experiencing the local lifestyle and sampling unique Vietnamese-Chinese delicacies.