Might not be the oldest dish of Hanoi as it has only been around for over a hundred years, but  Hanoi Grilled Fish ( “Chả Cá Lã Vọng” or “Chả Cá Hà Nội”)  is definitely the most unique among best known dishes of the capital city.

The origin of this dish dates back to the early 1900s when Vietnam was a French colony. Đoàn family, who lived at 14 Hàng Sơn Street, often hosted secret meetings for the resistance army. Therefore they decided to sell this home cook fish dish as a cover in addition to earning more money. The people called it “Chả Cá Lã Vọng” after the statue of “Lã Vọng”, a Chinese poet and revolutionist, sitting at the gate of the house. The delicious taste of “Chả Cá” soon made it popular, so much that the whole street was named after it later on. 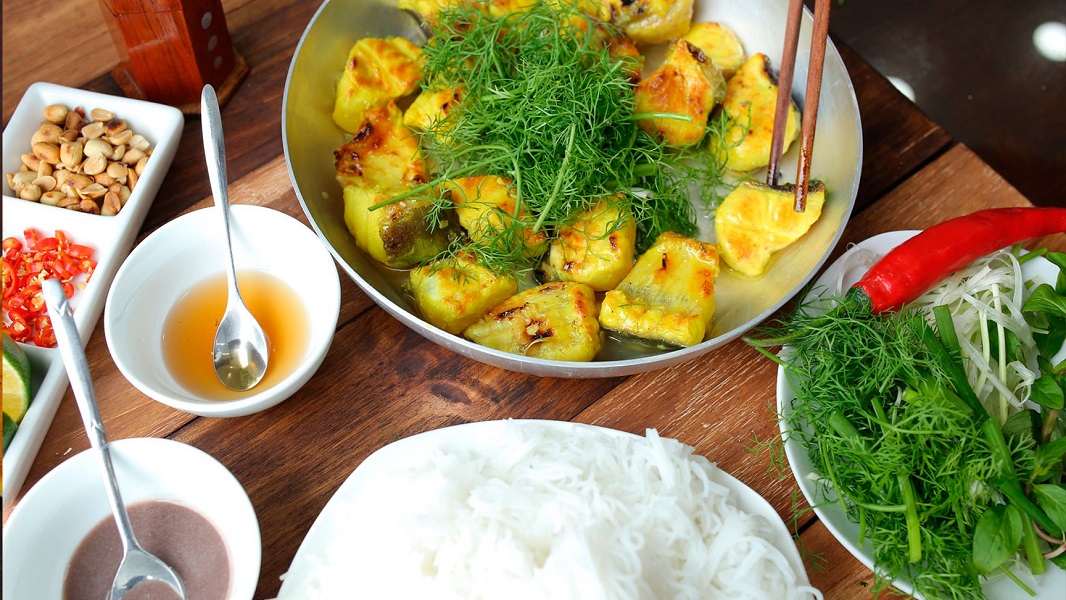 The fish used in this dish is Hemibagrus, a type of Catfish caught in the rivers of the northern mountainous area. It is one of the biggest river fishes thus very easy to remove all bones to have a big fillet. The fish is cut into matchbox-sized pieces, marinated in galangal and turmeric along with other spices. Then the spiced fish pieces are placed into bamboo clips to be grilled on charcoal until both sides are almost cooked. After that, the fish is put into a frying pan with hot oil, together with dill and spring onion for a short time.

“Chả Cá” must be served while hot with rice vermicelli, fried peanuts and coriander, all to be dipped into Vietnamese dipping sauce (contains fish sauce, vinegar, salt, sugar, garlic) or shrimp pate (“mắm tôm”) mixed with lime juice. The grilled fish pieces must not be broken or too dry, but are yellow, tasty, fresh and fatty.

If you have the opportunity to visit Hanoi, try this dish. I believe you will be completely fascinated because of delicious.