Home » Daily Updates » Night activities on the “ Street for Foreigners ”

Visiting the streets of Ta Hien – Luong Ngoc Quyen, known as the “ Street for Foreigners ” on weekend evenings, foreign visitors and local residents are greeted with a crowded and boisterous atmosphere. The gathering of thousands of international travelers makes this place special.

During the day, Ta Hien – Luong Ngoc Quyen Street is normal like many other streets in the Old Quarter of Hanoi. Along the streets are mainly travel companies, some restaurants and stores. But when the city begins to light up, the streets completely change their look.

Dozens of shops are open with inviting, twinkling colored light signboards. Ta Hien Street is only about 200 meters long, but almost all households along the road do business, such as bars, restaurants, and inns.

The streets are 6-7 meters wide but at night, pedestrians have only half a meter to walk because the entire streets, even the road bed are covered with tables and chairs to serve tourists who come to drink beer, ice tea and snacks.

The later the time is, the more crowded the streets are. Most shops are packed with customers. A youthful, charming atmosphere covers the area and it spreads out to the neighboring streets as Dao Duy Tu, Ma May …

Foreign tourists, after a day exploring the city or interesting landscapes in the neighboring provinces, come here at night to explore the nightlife in Hanoi.

The nightlife on the “Pho Tay” street in Hanoi is not simple. Behind that bustling scene are problems such as crime and disorder. 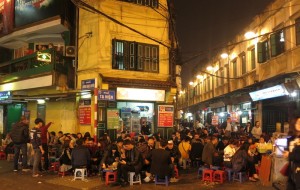 Several years ago, a young Vietnamese man was sued and sentenced after beating a foreign tourist, who was drunk and flirted with his girlfriend at a sidewalk beer shop on Ta Hien Street.

On the street, in bars, pubs … the atmosphere is also very lively. We left the pavement to go to a bar named Kha … rd, named after a lively, open round-the-clock street in Bangkok.

Mixed with the bustling atmosphere in the streets, the bar has lively dance music.

According to tour guides, Ta Hien Street is the first and last destination of most foreign tourists coming to Hanoi. They come here to enjoy “bia co” (draft beer) and Vietnamese food. Not only during the hot summer but also in winter, Ta Hien is crowded.

Local authorities said that because of the gathering of large numbers of foreign tourists in this area, they have to deal with a lot of security problems, caused by drunken foreigners and criminals.