Most of the ethnic minorities in Vietnam live in the mountainous areas in the north, near the Chinese border to the mountains Truan Son in central Vietnam. In areas that have experienced heavy fighting in recent wars. Their modest dwellings are simple wooden houses with the very simple facilities. There are often easily identifiable differences in language, physical properties and traditional clothes.

Today, Vietnam Typical Tours would like to introduce with readers about the Tay ethnic group in Vietnam. 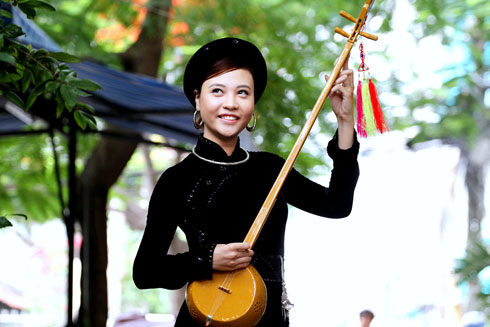 So, on trips to Ba Be Lake or Ban Giooc WaterFalls (Cao Bang) you will meet Tay people in Vietnam.

Tay traditional dress is made from homegrown cotton that is indigo dyed. There is usually not much embroidery or other decorations. Women wear skirts or trousers, with short shirts inside and long one worn on the outside. The Ngan group wears shorter shirts, the Phen group wears brown shirts, the Thu Lao group wears conical-shaped scarves on their heads, the Pa Di group wears hats that look like house roofs, and the Tho group tend to dress like the Thai in Mai Chau (Hoa Binh province).

The Tay have settled in valleys in the Northeastern part of the country: Quang Ninh, Bac Giang, Lang Son, Cao Bang, Bac Can, Thai Nguyen, Ha Giang, Tuyen Quang, Lao Cai, Yen Bai. Their villages are characteristically large and crowded, and there are villages with hundreds of houses.

The Tay traditional house is built on stilts with a frame of rafters and 4, 5, 6, or 7 rows of columns. A house has from 2 to 4 roofs made from tiles, straw, or palm leaves. Wood or bamboo is used to make the walls.

Young Tay men and women are free to love and to date each other. However, the decision to become husband and wife depends on their parents and whether their fates match each other’s suitably. That’s why in the marriage proceedings, the groom’s family asks for the bride’s fortune to be read and then brings it home to compare it to the fortune of their son. After the wedding, the wife stays with her parents until she is pregnant. It is only before giving birth that the wife goes to her husband’s family to live.

The culture of Tay is very diversified. They usually hold various kinds of ceremony regarding production, human life, wedding, funeral…. There is a rich folklore with many poems, dances, songs.

The Tay families often prefer son to daughter. They have detailed regulations on relationship between members in the family.

The villages of Tay ethnic group are often located by the base of the mountain or stream. The name of villages is often given after a hill, mountain, rice field, or river. Each village has around 15 or 20 households. The large villages are divided in to small hamlets. They live in thatched stilt houses.

You can see many of our other articles on travel, food and drink in Vietnam, Laos and Cambodia follows :