The name ‘Ha Long’ means ‘descending dragon’ and Vietnamese tell a tale of a dragon that descended from the sky, spitting out thousands of pearls that became the islands and islets we see today.

This spectacular bay and Natural Heritage Site stretches across the Gulf of Tonkin, 165 km from Hanoi. Hidden among more than 1,600 limestone formations, are secret grottoes, sparkling beaches, and jaw-dropping caves. 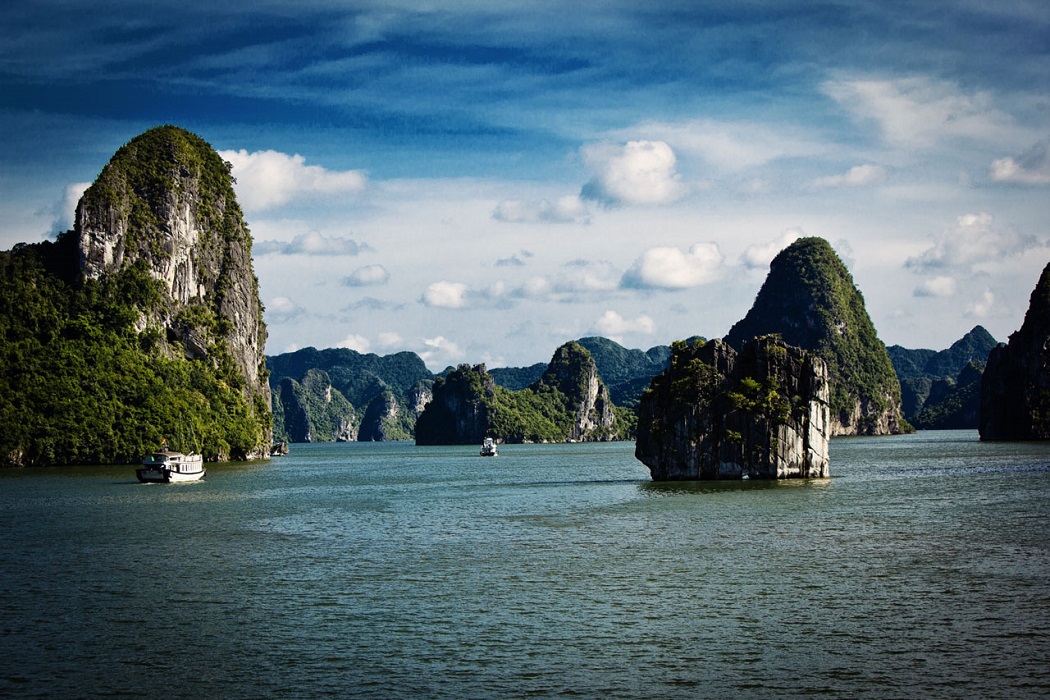 Sculpted by nature, Ha Long Bay encompasses 43,400 hectares of UNESCO-protected seascape. You could stay a week and not see all Ha Long’s wonders, but perhaps the best way to go is on an overnight cruise.

Falling asleep and waking up among the splendour of the karsts is the highlight of many a traveller’s time in Vietnam. Mornings are for watching the sunrise, practicing tai chi or sightseeing in the caves. Afternoons are spent swimming, kayaking or simply relaxing on the sun deck. Evenings arrive with striking sunsets and soothing sea breeze, and leave behind a sky riddled with stars.

The scenery in the bay is enhanced by the local life that continues in this dream-like setting. Floating villages rest on rafts, children row to school, men fish for a living, and women cook and sell their wares–all in the company of Ha Long’s majestic karsts and emerald waterways.

The Complex of Hue Monuments

In Central Vietnam, in the city of Hue, lie the magnificent vestiges of the Nguyen Dynasty. Here, against a backdrop of forested hills with a meandering river at their feet, the Nguyen emperors erected administrative offices, military headquarters, palaces, temples and even their own tombs.

Take a leisurely amble around the complex and watch Imperial Vietnam come to life in full colour. Imposing statues, priceless treasures and intricate mosaics wait around every corner. You can almost hear the strains of Hue’s famous court music and smell the aromas of the elaborate palatial dishes presented each evening. 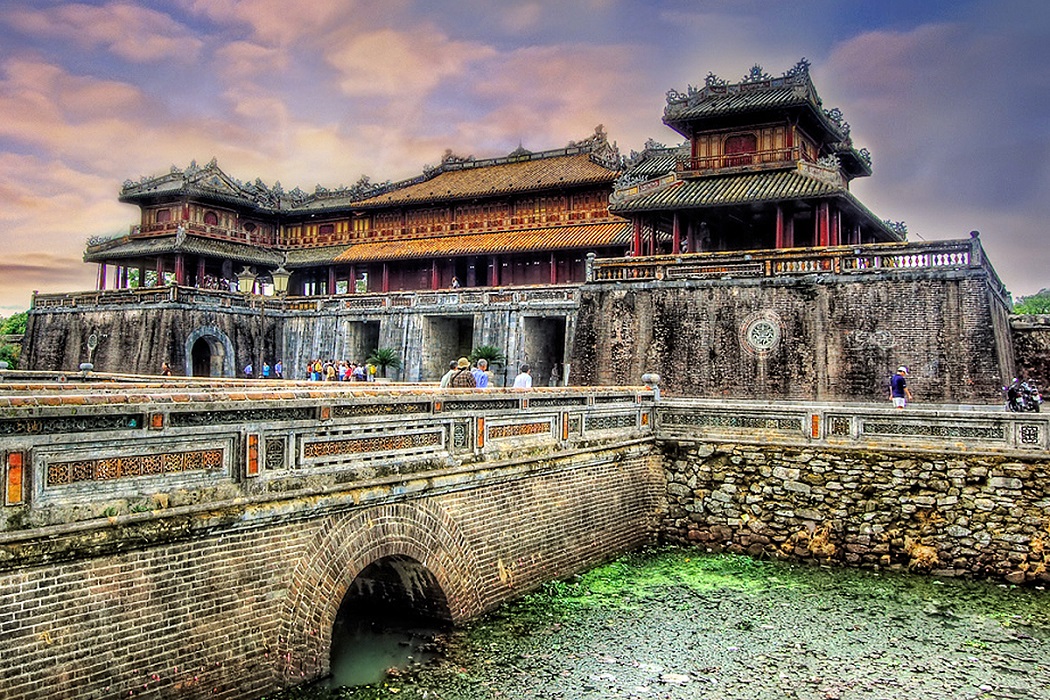 So, although the Nguyen Dynasty ended in 1945, the symbolic significance of the Hue Monuments–once the political, cultural and religious heart of Vietnam–still echoes today.

The plateau is a must-see destination for tourists in the northeastern province of Ha Giang. The plateau was recognized by UNESCO in October 2010 as one of just 77 geological parks in the world and second in Southeast Asia after the Langkawi Geological Park in Malaysia. 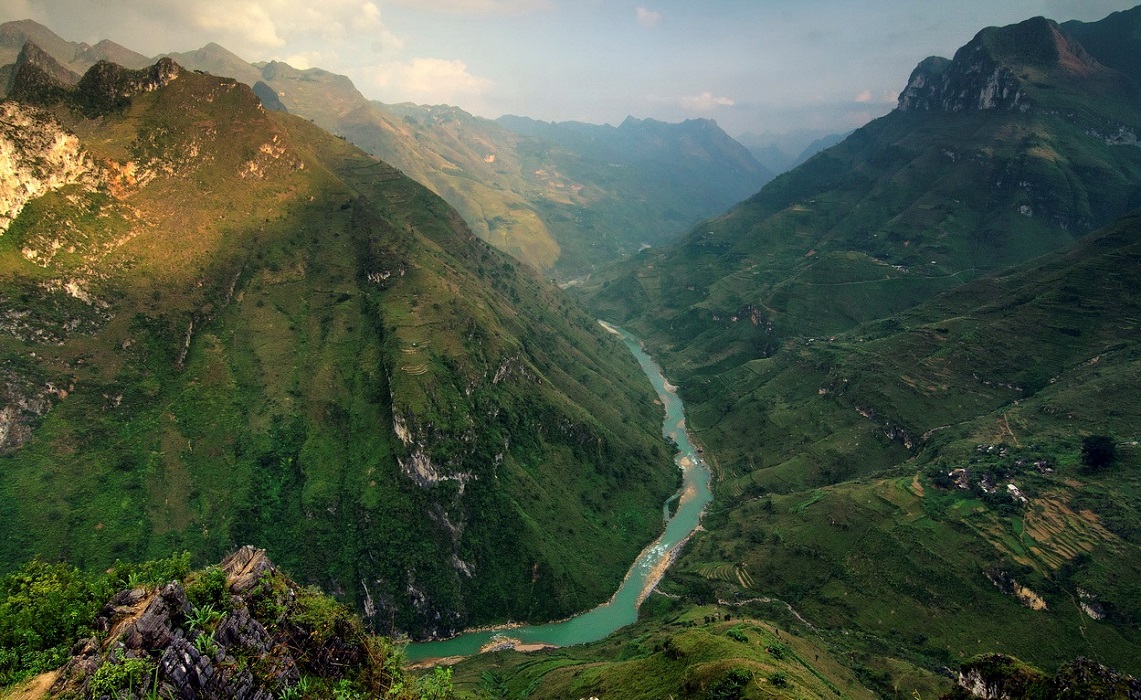 Over 80% of the surface is covered with limestone and it has a high concentration of rocky peaks sitting over 2,000m above sea level.

The rock of Dong Van is said to contain fossils from 400 million-600 million years ago.

The park spreads over the districts of Meo Vac, Dong Van, Yen Minh and Quan Ba, on a total area of 2,300 square kilometers. At the center of the Rock Plateau is Dong Van Town, located 150 kilometers from the center of Ha Giang Province.

Therefore, the plateau is not only a fascinating landscape but also a real piece of history with its historical relics providing plenty of material for research and culture preservation enthusiasts.

From Noi Bai International Airport, those wishing to travel to Dong Van Stone Plateau should head onto National Road No.2 to the north for 320 kilometers to arrive at the very peaceful Ha Giang Town by the Mien River.

Hoi An was once a bustling trading port, welcoming merchants from far across the seas. Between the 15th and 19th centuries, Chinese, Japanese and Europeans settled along the banks of the winding Thu Bon River. Today, 30 hectares of this ancient town is preserved as a UNESCO Cultural Heritage Site. 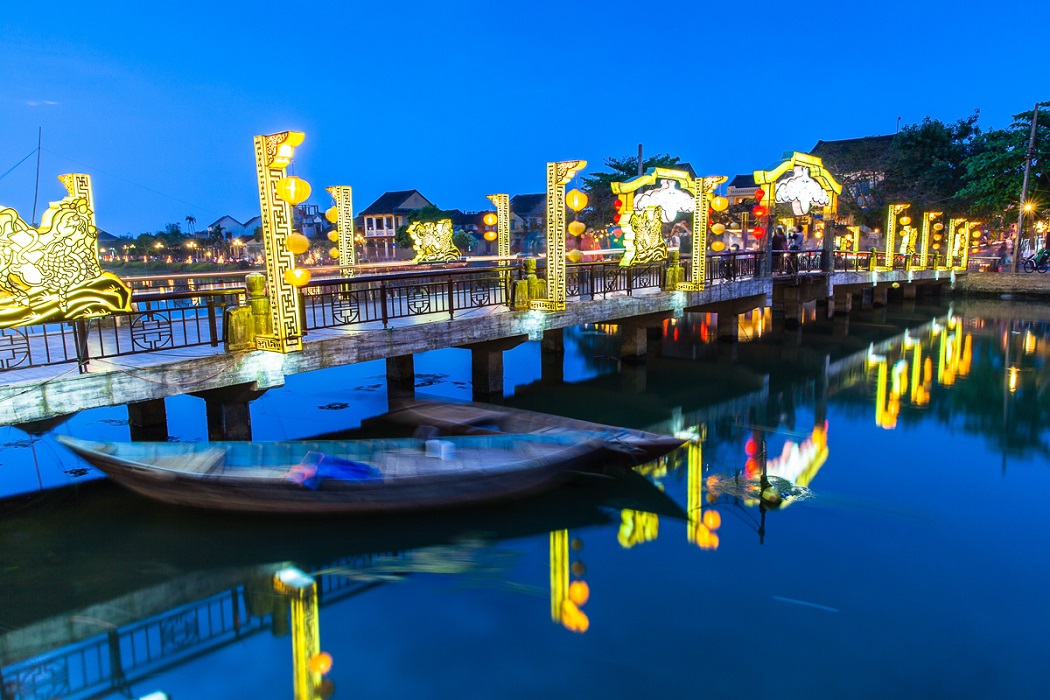 Hoi An’s unique fusion of cultural influences reveals itself within its narrow streets. Weathered shop-houses squeeze shoulder-to-shoulder alongside ancestral homes, their tiled roofs decorated in exotic wood carvings. Tucked away from the old ferry quay, you’ll find an open market, several pagodas and a timber bridge built by the Japanese. A stroll through Hoi An is a stroll back in time, and it’s even better in the evenings, when the faded streets glow in the light of thousands of silk and paper lanterns.

So, here are the suggestions for visitors: Top 4 UNESCO World Heritage Sites in Vietnam don’t should miss ! Do not forget to enjoy a fun holiday package in Vietnam with these destinations.